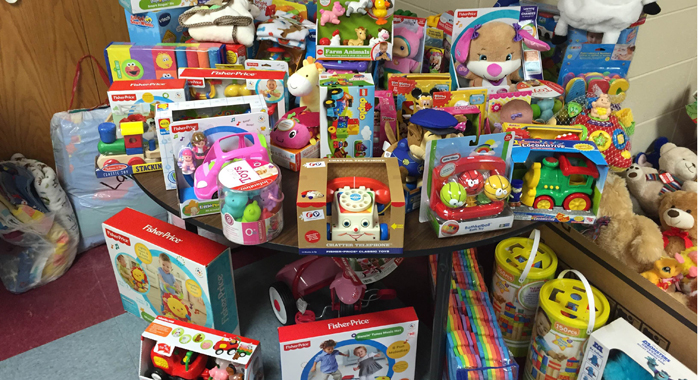 “The support from the community is just overwhelming this year,” said Jaime Radtke, Plach Automotive receptionist. “I couldn’t believe how many people brought in donations—bags and bags of toys.”

On the fundraising end, Plach customers bought 377 oil changes from which Plach donated $5 each time. The oil changes raised $1,885 for toy shopping.

“We helped a large amount of families with the toys that Plach donated,” Community Cupboard Director Kim Ebert said. “We really appreciate their help. They made a difference in a lot of children’s lives on Christmas morning this year.”

Ebert declined to release the number of families that benefitted from Plach’s contributions, saying she wants all donors to the Community Cupboard to understand their contributions are valued whether they give one toy or multiple.

The Community Cupboard food pantry, located in the Washington Center, lets parents take home to their kids up to three toys at no charge. Items such as pajama pants, jackets and fishing gear are also presented as gift options for families with teens.