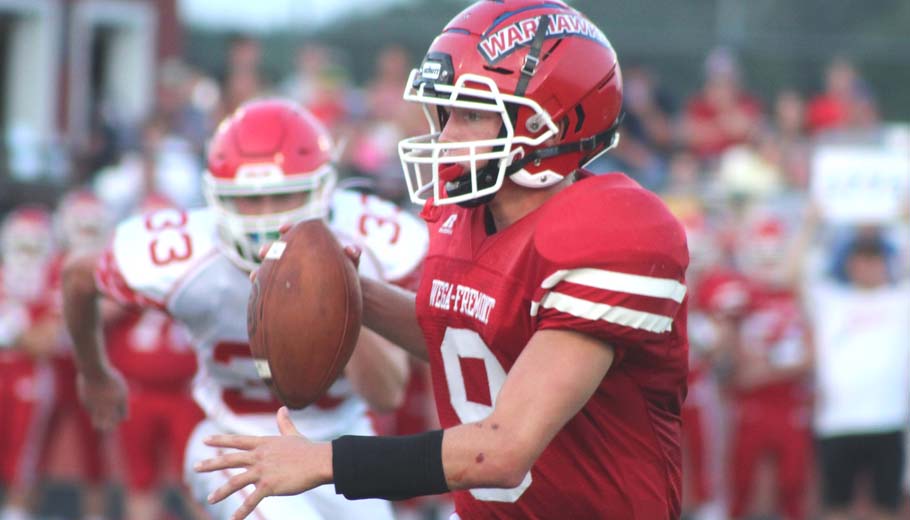 <
►
>
Quinn Dittmann rolls to his left as he looks for an open Weyauwega-Fremont receiver in the Warhawks' season opener against Pacelli. Dittmann completed 21 of 29 passes, but Weyauwega-Fremont fell to Pacelli 33-7. Greg Seubert Photo

The passing game was clicking for the Weyauwega-Fremont football team in its season opener.

The rushing game, however, turned out to be another story.

Pacelli held the Warhawks to minus-29 yards on the ground, kept them out of the end zone until late in the game and returned home with a 33-7 nonconference win.

The Warhawks were still in striking distance at halftime after the Cardinals scored once in each quarter to take a 14-0 lead at the break.

Brycen Cashin’s 1- and 2-yard runs were the only scores of the half.

He added runs of 9 and 69 yards in the third quarter and Nick Schroeder closed the scoring for Pacelli with a 1-yard run in the fourth quarter.

Weyauwega-Fremont’s points came with 1:29 to go in the game on Quinn Dittmann’s 29-yard touchdown pass to Park Groskreutz.

Cashin and Schroeder turned out to be an effective one-two punch out of the Cardinals’ backfield, as they accounted for all five of their team’s touchdowns and combined for 326 of Pacelli’s 347 rushing yards.

The Warhawks will travel to Brillion Friday, Aug. 27, for a 7 p.m. nonconference matchup with the Lions.