Taking a punch at Parkinson’s 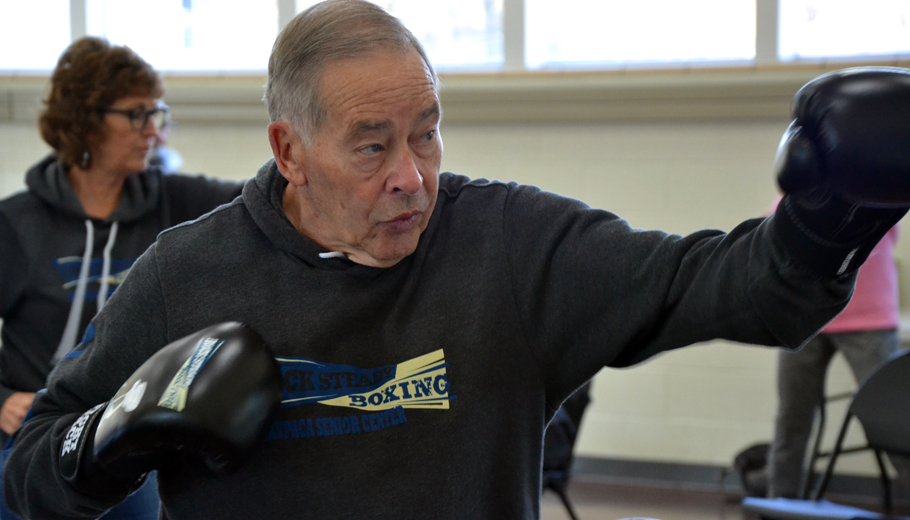 <
►
>
Peter Manley lands a left hook as Mary, his corner-person (and wife), holds the punch mitts. They drive from Wisconsin Rapids to particpate in the class. James Card Photo

Peter Manley put up his fists and threw the first punch: a left jab followed by a right cross. He ducked slightly and came up with a slashing left hook and a lights-out right uppercut.

He wasn’t fighting another boxer. He is fighting Parkinson’s disease.

He is one of a handful of boxers that train twice a week at the Waupaca Recreation Center.

The classes are led by instructors of the Senior Center.

The no-contact program is called Rock Steady Boxing and it is based on the premise that the boxing can reverse, reduce and delay the symptoms of Parkinson’s disease.

Rock Steady Boxing is a nation-wide nonprofit and was founded in 2006 by Scott Newman who was diagnosed with early-onset Parkinson’s. His friend Vince Perez was a Golden Gloves boxer and came up with a boxing-based exercise program that might help offset the symptoms of the disease.

Newman made excellent progress and it matched up with medical literature that supported the idea that strenuous exercise that involves mobility, balance, coordination, strength and rhythm could slow the progression of Parkinson’s.

Manley’s corner-person is his wife Mary. The corner-person assists the boxer in the drills and rounds up training equipment.
The name is derived from the world of prizefighting where a “cornerman” will plug a nosebleed or apply an enswell to reduce swelling in between rounds.

“It is good exercise and its good social interaction,” said Manley, a former triathlete. “It keeps you on track and you try some exercises and some different things. They have a lot of different equipment so it stays interesting.”

They drove over from Wisconsin Rapids to attend the class. So far the Waupaca class has attracted people from Antigo, Wausau and Stevens Point.

There are 16 Rock Steady Boxing programs in Wisconsin. The only other ones in the central Wisconsin region are Wautoma, Oshkosh, Appleton and Green Bay.

The training session starts with a series of stretching and coordination drills led by Sara Reybrock, the Senior Center coordinator. She earned her certification at the Rock Steady Headquarters in Indianapolis and started classes in Waupaca in September 2020.

Vanessa Wowzynski, a physical therapist at Thedacare, and Helen Halverson, a fitness instructor, are also certified coaches involved in the program.

After the warm-up, the gloves come on and the boxers progress through a series of jabs, crosses, hooks and uppercuts. The corner-person puts on a pair of punch mitts and the boxers can hit freely with a combination of punches mixed with ducking movements.

Don Tommet was diagnosed with Parkinson’s last year and has been training since the first class. He pointed out that some people with Parkinson’s have tremors and he does not. For him, it was a loss of balance.

“It helps with balance. When you’re boxing you’ve got to lift,” he said as he demonstrated how a boxer shifts their weight from one foot to another when throwing a punch.
“There’s improved balance, walking, coordination, speech. All the aspects we focus on we see improvement, said Wowzynski.

“Besides the classes, it is also a support group and it’s good to see how other people are doing,” said Tommet.

Next, they took turns slugging the heavy bag and then moved onto a freestanding torso dummy named Bob. The boxers grabbed Bob by the shoulders and kneed him in the gut.
They moved onto the speed bag which is hit on a three count: Bam! Thump, thump, thump, bam! It is the trickiest of all the drills to master but the reward is increased eye-hand coordination and a better developed sense of rhythm.

After training on a balance beam and a stability ball, they grabbed a pair of dumbbells and worked their way through sets of curls, presses, extensions, kickbacks and flies.
Out came the floor mats and they did some bird dog stretches and then rolled over on their backs for a mediation and deep breathing session. With the sound of gentle ocean waves in the background, instructor Halverson talked them into a mesmerizing state of peaceful bliss.

At the end of the session, they gathered in a circle and shouted their rallying cry in their battle against Parkinson’s: “Never. Underestimate. The heart. Of a fighter!”