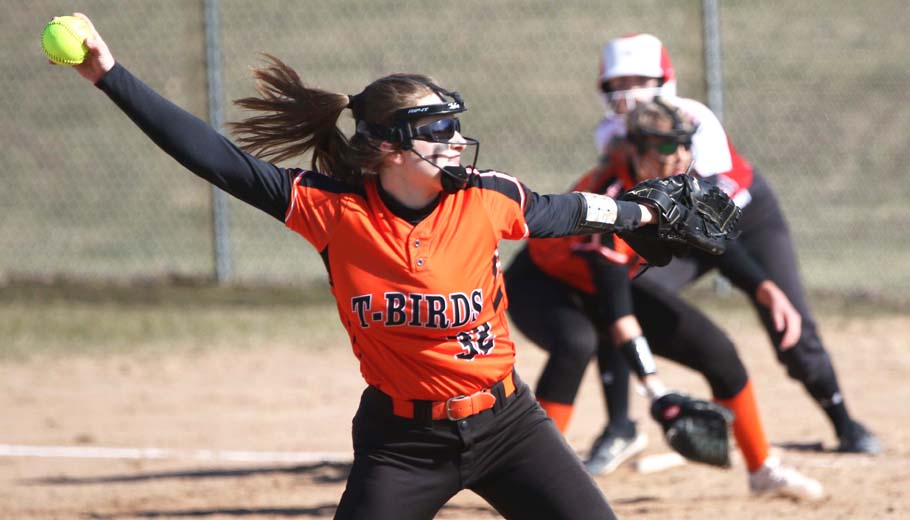 <
►
>
Iola-Scanadinavia's Jaelyn Sivertson is able to outrun Manawa's Lily Krenke and ended up safe at third base April 19 in a matchup of Central Wisconsin Conference teams in Iola. Iola-Scandinavia won the game 12-1. Holly Neumann Photo

The Iola-Scandinavia softball team is on an early-season roll.

Recent wins over Shiocton and Manawa gave the Thunderbirds a 4-0 overall record and a 2-0 mark in Central Wisconsin Conference-East play.

Iola-Scandinavia scored six runs in the first two innings and held on to beat the Chiefs.

The game included three home runs, four doubles and many hard-hit balls that were caught on defensive plays.

With the T-Birds leading 6-0 after two innings, Shiocton scored three runs in the third, as Larissa Young’s three-run home run cut Iola-Scandinavia’s lead in half.

Makayla Much gave the T-Birds an 8-3 lead in the fourth inning with a two-run home run, but Young responded with her second home run, a two- run blast, to make the score 8-5.

The T-Birds outhit the Chiefs 13-8. Sivertson led the way with four hits, including a double. Alexa Christoph, Maddie Much, Makayla Much and Munoz each had two hits. Makayla Much drove in three runs, while Sivertson and Christoph each drove in a pair.

After two scoreless innings, Iola-Scandinavia exploded for 12 runs in the third.

Lily Krenke had two hits for the Wolves and Kennedy Rosin drove in Manawa’s lone run in the fifth inning on a double.

Munoz pitched all five innings to earn the win, allowed four hits and no walks while striking out four batters. Kelsey Behnke started the game and pitched the first two innings in taking the loss. Briley Rosin pitched the final two innings. Behnke allowed four hits, two walks and had no strikeouts. Rosin allowed seven hits, no walks and had two strikeouts.

Iola-Scandinavia will host Pittsville at 4:30 p.m. Friday, April 29, before hosting Menominee Indian Monday, May 2, for a CWC-East doubleheader at 4 p.m.

The T-Birds will also hit the road for two games, as they travel to Amherst on Tuesday, May 3, and Wittenberg-Birnamwood on Thursday, May 5.