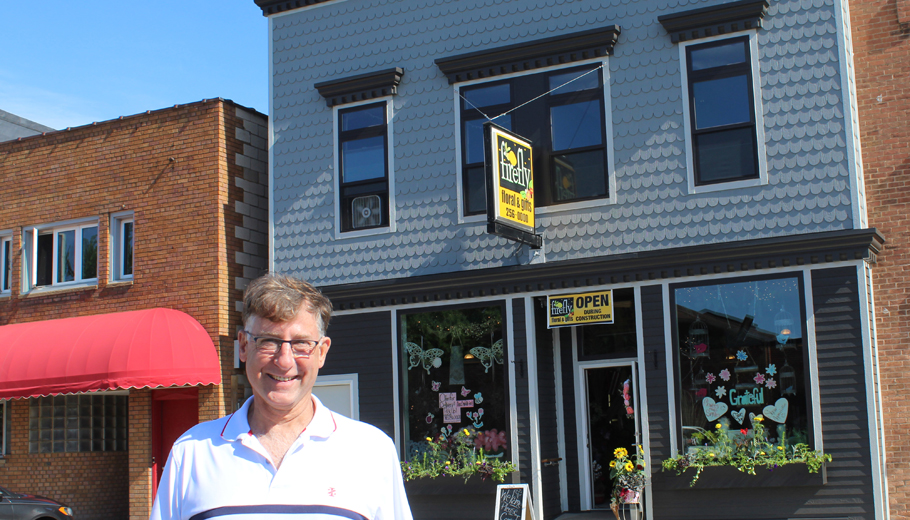 <
►
>
Bob Telfer is pictured in front of the building he owns on East Fulton Street, in downtown Waupaca. Angie Landsverk Photo

A recently completed project in downtown Waupaca included reinforcing a building’s structure and giving it a new facade.

Firefly Floral and Gifts is on the street level, and there are two apartments on the second level.

Telfer bought the building about 12 years ago.

The need to repair the building became apparent about two years ago, when the city of Waupaca reconstructed the parking on the city square.

“When the work was done, there was lots of vibration,” Telfer said.

There were cracks by the windows on the second floor.

For years, the building had been slowly settling, he said.

How the sides were starting to shift was seen when work was taking place to hook up the water lateral.

“They got the line to the building and hooked it up quickly,” Telfer said.

When Jane Drager, the city’s building inspector, did a walk through of the building, she saw how the bricks had settled and moved apart.

She began writing a raze or repair order.

Telfer had 30 days to get started on a project.

He quickly decided to contact Greenwood Project Management, which had restored Danes Hall of Waupaca.

“It was the only place I thought of,” he said. “They did such a nice job there.”

He said the timber frame building had wood columns, beams and joists.

Because of Drager’s due diligence, they were able to do what they did to restore the building, Hoffman said.

Telfer said each of the original beams going across needed a new support.

Every four to five feet, whole trees had been used for support.

Some of those trees still had the bark on them.

“We shored up the whole building,” Hoffman said. “We reinforced every beam in both sub-basements. That was one of the main things we had to do in order to make the building solid again.”

Hoffman said they were able to straighten out the building and make it level.

The building has two basements.

“Everything below had to be jacked up and resupported,” Telfer said.

All the electrical also had to be replaced, he said.

Telfer shared his story because he wants those who own buildings on Main Street and know their buildings have problems that they should get them fixed before Main Street is reconstructed next year.

Hoffman estimates the building was constructed in the late 1880s or early 1900s.

The approach was to do what was best for the building.

He said the brick and masonry were historic in a sense.

While the brick was old, it was not very decorative, he said.

“From an aesthetic point of view, it wasn’t like Danes Hall, where it was something historic that we needed to restore,” Hoffman said.

It did not make sense to stick more money into the repair than the building was worth, he said.

That is why they proposed a new, maintenance-free facade for it.

“We came up with a different look for the building,” Hoffman said.

The changes to the facade included increasing the size of the windows.

“I wanted it right back to what it looked like years ago,” Telfer said.

He wanted cedar shake siding, and after many discussions with Hoffman, they came up with the design.

Telfer thinks the siding’s scallop fits in with the bandstand and noted the turret on Danes Hall also has scallops on it.

They came up with different color palettes before choosing the colors.

“It was extremely gratifying,” Hoffman said of the project.

Telfer said it was amazing process and described those who worked on it as artists.